Editor's Introduction: This week's offering delves into the supernatural in a very mundane, and intriguing way, as a traffic stop in Texas leads to an... 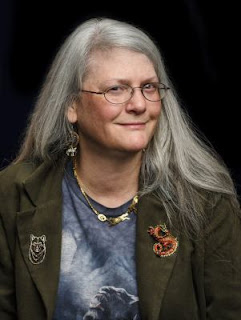 Author's Bio: Julie Frost utilizes her degree in biology to write werewolf fiction while completely ignoring the physics of a protagonist who triples in mass.  She writes other types of fiction, too, on occasion, from hard science fiction to space opera to secondary-world fantasy to urban fantasy to horror. Sometimes she mixes them.

Her short stories have appeared in too many venues to count, including Writers of the Future 32, Monster Hunter Files, Enter the Aftermath, Stupefying Stories, Planetary Anthologies, StoryHack, and Astounding Frontiers.

Her novel series, "Pack Dynamics," is published by WordFire Press.Â  She whines about writing, a lot, at http://agilebrit.livejournal.com/,
at December 22, 2019

Sirius Science Fiction is an on-line web site dedicated to publishing original speculative fiction - science fiction, fantasy, alternate history and horror. We like stories with a sense of wonder and excitement.
In a time when mainstream speculative fiction has been overrun by political correctness and identity politics, we offer a venue free of pretension and ideological litmus tests. We read the story free of preconceptions, and we do not ask for a biography from an author until and unless their story is accepted.
Sirius Science Fiction publishes two original stories per month, plus occasional reprints.

$25 for each original story upon publication.
Payment is by U.S. Postal Money Order. Our editor lives in such a rural county he doesn't have reliable internet and often can't use PayPal because the ISP is down or running very, very slow.